When they were around 11 years old, both my two older brothers were taken by the… 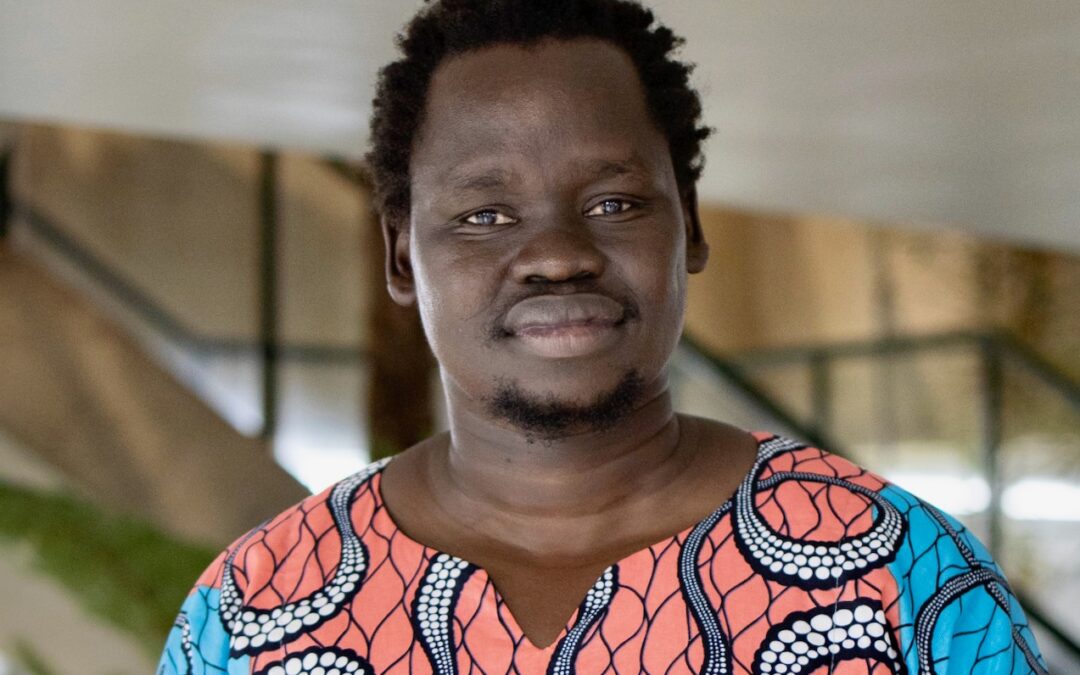 When they were around 11 years old, both my two older brothers were taken by the military into the child soldier program in South Sudan. That happened before I was even born, so I never knew them.

My memories of growing up are of war, and constantly moving. Whenever the militants came, they would take whatever food my mother had prepared for the family, and some of our cattle. Sometimes the World Food Programme would come and drop food, but then the North Sudanese would come as soon as they left to bomb people. So we never knew which planes were for food and which were for bombing. Sometimes there were unexploded bombs in the village, which we kids would play with.

My father eventually found out from a UN worker that my two older brothers were alive in the Kakuma refugee camp in Kenya. And when I turned 11, he said, ‘I would rather you run away to another country than have another of my children go into the soldier program’.

Around that time, a local woman, Mary, decided to take a group of us children to Uganda. We walked at night because it was too hot to walk in the daytime, and also because the darkness protected us. Without Mary, it would have been very dangerous, as we had to cross the lands of tribes who were in conflict with our tribe. But Mary spoke many languages, and if we ran into people, she would tell them that we were all rescued children from their tribe, that she was returning home. And so they would let us pass.

It took us about 6 months to get to the Ugandan border. There were more than 20 children who left together. Some of us made it, but some of us didn’t.

We were taken to the UN compound, where we were interviewed, and after 2 months, we were approved to settle in the Adjumani refugee camp in Northern Uganda.

It was a very difficult life there. Every fortnight, we got a little food, but unfortunately, the Northern Ugandan rebels would frequently come to the camp and take it. As a result, we were often starving, eating only bananas and mangos which grew around the camp. The rebels would also sometimes make us carry the food to the bushland and then not release us unless it was to go back and get more food. Some of the children who had come with us died due to the suffering and the lack of food. After a year and a half, we said we couldn’t take it anymore.

Luckily, my oldest brother heard I was in that camp, and he decided to come to Uganda to collect me and the other Sudanese children and take us to the Kakuma camp. He had to travel for two weeks through some very dangerous areas to get to me. When he arrived, I saw him for the first time in my life, and I was so happy!

Then he had to take us back through all the same very dangerous areas. Sometimes, he would have to bribe someone. Sometimes we had to get off the bus and walk through the jungle and then get back on the bus at the other end. We also had problems at the Kenyan border, but my brother handled everything.

As soon as we arrived, I found out my other brother had gone to Australia. He had been sponsored by the UN to go to a Kenyan boarding school and because he had done really well, he had received a sponsorship to study at Griffith University. When he finished his degree, he applied to sponsor me and my two siblings to join him in Australia, and our application was eventually approved. By that time, I was 16.

School in Australia was tough. I probably should have gone into grade 7, but due to my age, I was put in grade 10. I really wanted to go into the Science stream, because I wanted to understand how to bring down the helicopter that used to come and attack our village. At first, my teachers said they couldn’t approve it because it was too difficult. But I told them my brother, who was a scientist, would help tutor me at home, and they finally agreed to give me a go.

I studied hard, did well in maths and science, and was accepted to QUT to do a Bachelor of Aerospace Avionics. After that, I wanted to go back home and see the rest of my family, but unfortunately the war broke out again, and my village was attacked. Luckily, they also escaped to Kakuma.

I next decided to do a Bachelor of Electrical Engineering, because I was hoping to one day go and give electricity to my village using solar power.
After that degree, I got a job in avionics engineering with a company who provide military aircrafts for Australian Defence, which I am still doing today. That was a life changing event for me.

There’s still a lot of discrimination towards the South Sudanese here. I myself faced some discrimination at university. For example, when we had to do group work, the other students in my group wouldn’t give me the address of the house where they were working together.

That’s one reason why I became a community leader here. I’m trying to bring young people together, not only to help them understand Australian culture, but also to help them with their studies, so they can achieve their dreams, as I could.

I want them to understand that even when you go through a lot of difficult things, there is still hope.

Read more inspirational stories in the New Humans of Australia coffee table book, or give a heartwarming gift to a friend: www.newhumansofaustralia.org/shop ☺️