When the war broke out, we stayed in Aleppo as we thought it was safe. But one d… 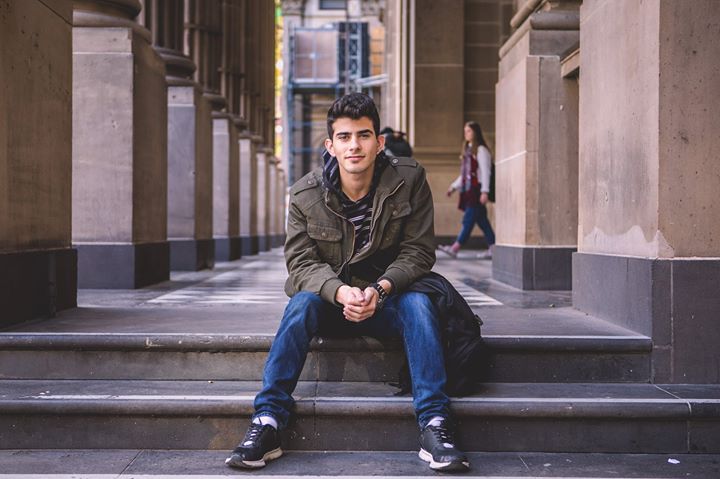 When the war broke out, we stayed in Aleppo as we thought it was safe. But one day, suddenly bombing and terrorist attacks started to happen nearby where we lived. After that, we moved to Damascus, where we were in the worst situation ever as my father was called up to the military, which meant he couldn’t leave the house to work. So, although I was only 16, I was suddenly the only one who could work to feed the whole family. I started working about 13 hours a day as a waiter. It took me an hour to travel to the restaurant and an hour back, so I spent almost 16 hours out of the house, just trying to do my best. I didn’t get days off – I used to work on weekends as well so I got very tired.

We stayed in that situation for two years. Then my uncles contacted us from Iraq where they had travelled some years before, telling us we should go there because Australia had opened visas for refugees. So we went to Iraq, applied for the visa, and waited there for a year and a half. Unfortunately, it was the same situation for me as before. My father found a job, but it wasn’t enough money, so I had to do the same thing as I had before, working 11 to 12 hours a day, this time with one day off a week. That’s all I can remember from Iraq, just working.

I spent the last two months before I came here without a job. I started reacting to trauma. There were bad things that had happened that I couldn’t forget. For example, the day we left Aleppo, there was a bombing nearby us and I went to check on my friend who lived there. When I arrived, I saw him on the electricity pole – half of him. These are things that you just can’t put out of your mind. I didn’t eat, I didn’t go out, I didn’t do anything, I just stayed in bed for two months. It was more than depression. I felt like I was in a black hole. I didn’t know what was going on. We weren’t sure about the visa, whether we were going to get accepted or not. I was just lost.

When we found out that we were finally going to Australia, we had a big party, just celebrating by ourselves. I can still remember the smile on my mother’s face and on my sister’s face. We were feeling hope again. Hope that we hadn’t felt for a long time, in six years. It was one of the greatest moments in my life.

When I first came to Melbourne, for a while everything felt so strange. I just couldn’t understand the people and the accent, or anything that was going on. I felt so alienated and different. And I didn’t have anyone to talk to or go out with. But now I have friends from every background, which I love!

I’m currently doing a Certificate IV in Photography, and my next plan is to get my Diploma. One day, I’d like to move into photojournalism, so I can show people the situation I was in. I believe that when you communicate with people visually they understand the idea more strongly than when it’s written, and I want people to understand what it was like so they will be more supportive of the situation and will try more to help.

If I have a message for people reading this story, it is not to take anything for granted, and to appreciate everything you have, because you never know what’s going to happen. My father had a good job, we built our house, we were comfortable, we had a great life.

But in just a moment, it can all be lost.

Become a NHOA supporter and join the team making it happen. www.patreon.com/newhumansofaustralia

Big thanks to all patrons for your ongoing support. Without you, I couldn’t keep telling these stories. ❤️