When I was a baby, we had to flee Ethiopia because the regime started making thr… 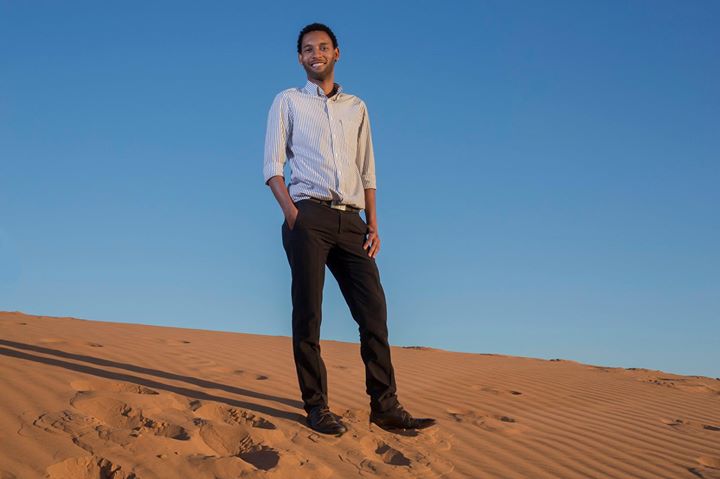 When I was a baby, we had to flee Ethiopia because the regime started making threats against my father and his family. We are from the Oromo ethnic group, which have been persecuted for a long time, and my father was a political activist.

Life in Djibouti, the neighbouring country, wasn’t easy. My father was a qualified electrician by trade, but as we were living in Djibouti illegally, he could only get odd jobs here and there. As a result, we were very poor. Eight of us lived in one room, which served as the bedroom, the lounge, and the kitchen. We were also constantly harassed because we didn’t have paperwork, and the police would arrest us children, and threaten to put us in jail or deport us if our parents didn’t come and pay.

Finally, when I was around 10, a decision was made that my mother and all the children should go to Kenya, while my father stayed behind to continue working so he could support us. As we didn’t have passports, we had to cross borders overnight to hide from the border security guards. But as soon as we arrived, we went to the UNHCR office in Nairobi and registered ourselves as refugees. That enables you to live in the country, but you still get harassed. I got arrested many times, and so did my Mum and siblings. Finally, I found a way to work the system because I learnt the local language so well, I claimed to be a local!

We knew my eldest sister had settled in Australia, but for years we had lost contact with her. When we got to Nairobi, we eventually were able to track her down through people we knew, and she started supporting us financially, which meant that we didn’t need to go to a refugee camp. It was safer for us to live in the city, and I was able to go to an English language centre that was run by a church for refugees.

Then, after 3 years, my sister started the process to sponsor us to come to Australia. Two years later, we found out we’d finally been approved. That was the best day of our lives, as we could finally see an end to all of our challenges. It was an unbelievable feeling.

When you get sponsored, your sponsor has to pay for everything so my sister had to take out a loan to pay for all our flights and to be able to support us. We even lived in her house with her husband and 3 kids when we first arrived. I think it had been twenty years since she had seen all of us, and she had never even met me and my younger sister, so it was an exciting time for all of us.

After a few months, we got into public housing in Melbourne and I started school. At first, they put me in year 10, but I didn’t find it challenging enough. I didn’t like that I had to do cooking class – I thought that was a waste of time! So I approached one of my maths teachers, who was very understanding. She said, ‘Why don’t you try a week of year 11 and if you think you can cope with those challenges, then we can make the change for you.’ I tried, and after a week I said, ‘Look it’s hard but if you’re willing to help me, I’m willing to get through this!’

Next, I did a Bachelor of Oral Health Science at LaTrobe Uni, because I had always wanted to do something that involved helping people. After uni, I was lucky I already had a job lined up at a clinic I had volunteered at during school holidays. But I didn’t find it challenging enough, so I eventually decided to take a job in Mildura. In the country, people have more serious dental problems and, as a new graduate, that’s the best way you can learn – to put yourself in the deep end and put your knowledge into practice!

When I first got to Mildura it was tough. I was one of the few minority Africans in town! The people were really nice, very friendly, but after a while I got sick of being asked, ‘Where are you from?’ I just kept telling them I was from Melbourne.

I am now moving back to Melbourne to work in a joint role for the Royal Dental Hospital and the Royal Flying Doctors. This is a unique opportunity and I’m hoping it will help me gain even more skills. But I think I might come back to Mildura. I’ve been here for close to 8 years now, and I feel I’ve really found my place. I love the country lifestyle, and I love feeling connected to the community and seeing all my clients at the supermarket and down the street!

I haven’t found love yet though. Mum tells me it’s a good time for me to settle down. My youngest sister just had a baby, and Mum keeps reminding me that I’m the last man standing. When I’m ready I’ll have them – I’m not in a rush though!

This story is brought to you by Gutsy Probiotic Drink Sachets – a great alternative to unhealthy soft drinks or juice: sugar, gluten and lactose free, vegan, and environmentally friendly!