When I was 19, I had a boyfriend who rode a motorcycle and through him I fell in… 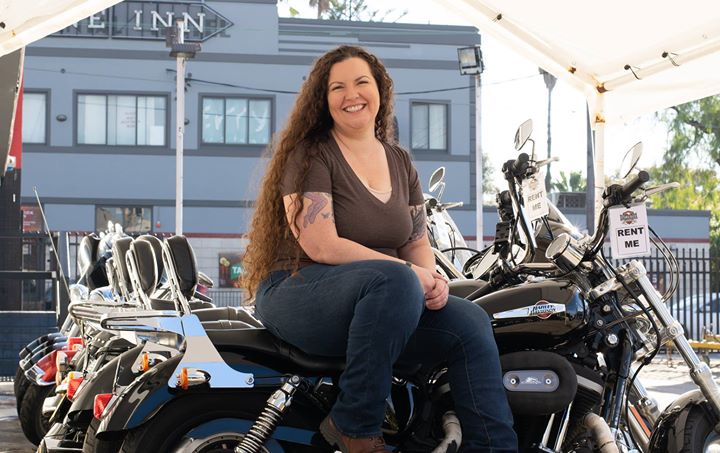 When I was 19, I had a boyfriend who rode a motorcycle and through him I fell in love with riding. And then I had one of those terrible weeks where I lost the house, the dog, and the boyfriend in a break up and I was in this moment of absolute devastation. One day, I was talking to a friend about how terrible my life was and just then a motorcycle rode by and I looked up to see it, and my friend said, ‘What is that?’ and I said, ‘Oh, that’s that new Honda CBR900RR!’ And he said, ‘That. That is what you should be doing. Do you have any idea how much your face lights up when you talk about motorcycles?’

Of course, I ignored him but a few weeks later a TV commercial came on for a mechanic school and I called and enrolled myself in a motorcycle mechanic course. At that time, I was working as a bartender at my family’s restaurant in a really small town, and I remember all the customers bet on how long I would last in a big city. I think the longest bet was 6 weeks!

I was one of only 3 women out of 1100 men at my trade school. Most of my instructors were great, but one wasn’t and really tried to get me out of the industry. One time, he was talking about oil and said, ‘Oh Santina, you’ll know about this – this is what you use on your sewing machine.’ Another time he said that I should leave to make a space for someone who would actually get something out of the course. But the other guys in my class were cool. They would come over to me and say, ‘Don’t listen to him. He’s wrong.’ And they really kept me going.

You know what’s funny is that of all the guys in my class, I’m the only one who’s still in the industry!

I met my husband working for Harley-Davidson’s corporate headquarters. In 2004, we left because we were planning to buy a Harley-Davidson dealership together. But we had some time to kill and one day an email came through saying cheap flights to Australia for $900, and my husband asked me if I wanted to go down there and meet some friends of his in Sydney.

When we arrived, one of his friends told us we could stay for free in this great house he was renovating, so as a thank you we offered to help out in his Harley-Davidson dealership for a week while his staff took Christmas holidays. At the end of the week, we suggested some changes he could make to the store and he said, ‘Why don’t you change it yourself?’ And offered for us to become his business partners!

My husband and I had non-refundable tickets home, and had only bought one suitcase. We just sat together on the end of the bed, saying, ‘So are we going to do this, are we really just going to move to another country?’

The first year was hard – I was so lonely and sad I got a teddy bear to talk to! I had no friends. We were working with a small team of staff who were very loyal to each other, but they hated us because we wanted to change things. We bought all of our American training to a market that was 15 years behind. At that time, there weren’t even computers in the store, and this was 2004! But we grew that business from 5 employees to 17 employees.

Eventually, we bought a dog and I got to talk to people when I was walking the dog, and then I started to feel like I was part of the community and not a visitor. Then I started playing roller derby and I made a lot of friends there. That’s when I felt I really became Australian.

Eventually, we sold our share of the shop back to the original owner and started our own business – EagleRider, a motorcycle rental business in Burwood. We have a lot of international customers – sometimes my counter is like the UN! But motorcycles are like a universal language, and once you speak it, it’s like a secret handshake and it doesn’t matter where you’re from.

The US feels like a foreign country to me now. I even find myself cheering for Australian sports. Recently, an Australian won the Dakar race and I felt such a sense of national pride! My mother is still waiting for me to go back to the US but I tell her I don’t live there anymore.

I need your help! Can you offer your support to New Humans of Australia on an ongoing basis? For as little as $1 a month, you can become a patron and get all stories direct to your inbox. Or become a strong supporter for only $10 per month and get a free copy of the amazing book! Whatever you choose, it all adds up and helps me to do my work. Thank you to all my patrons, supporting the arts and supporting social change! ❤️ ❤️ ❤️