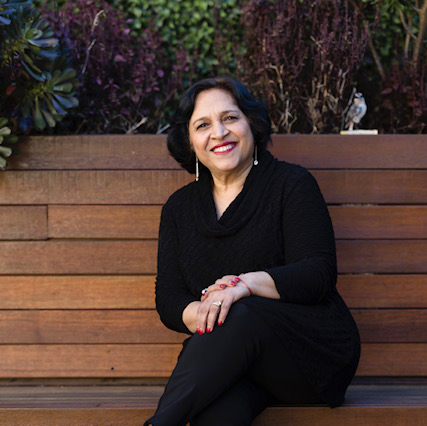 I had a lovely life in India with many luxuries. My dad had a good job and I was pampered and happy. I was very close to my family, and I then had an arranged marriage with a very nice husband and in-laws. But even though my parents had deliberately looked for someone for me that lived close by, my husband became increasingly keen to go and work overseas. I just went along with his daydreams because I didn’t think it would ever happen.

Then one day our application for permanent residency in Australia was granted. At first, my mother wasn’t worried because she thought my dad wouldn’t let me go. But he was our biggest support! I didn’t feel good about leaving them, so I kept on saying, ‘I’m going only for one year, just to check it out, and then I’ll come back.’

At that time, in 1992, there was no internet, and we had very limited information about life in Australia. As a result, we were quite worried about how we would manage with our two young children in a new country. In the end, after many discussions with our family, we made the difficult decision to leave our one-year-old daughter in the care of my parents until we settled in. It was hard at the airport. I can never forget that. I remember I was crying and she was just looking at me. But after we left, she was so pampered and became the center of my parents’ universe!

We had just one acquaintance in Melbourne – one of my husband’s work colleagues, who picked us up from the airport and let us stay with his family for a few days while we found a place to rent close by.

But after he helped us get settled, we were alone. We had no friends. I used to look at all the Indian surnames in the phone directory and think, ‘There are Indians here’. And then one day, we actually met one! He went into a milk bar, and we kept waiting outside for him to come out. He introduced us to a few people, and we also slowly made some Aussie friends through my daughter’s kinder.

At that time, there was a recession here, so we had to go on Centrelink at first. But fortunately, my husband got a job as an engineer within a month. He felt very welcomed at work. We found everybody welcoming. I used to love it when the tram driver would stop and help me with my daughter’s pram! These small acts of kindness made a big difference.
International phone calls at that time were quite expensive so my dad would just make short calls to give us updates. But he wrote to me every single day about what my daughter was doing. And after a year and a half, we brought her back with us.

Slowly, we built a life here. I had done a PhD in Zoology in Parasitology, but my field was not really active here. As a result, I did a course in Medical Microbiology from Monash University, and since then I’ve been working as a scientist in pathology.

I was also quite active with the Indian community here, and I loved seeing it grow. We started a Saturday school with our friends where our children could learn Hindi, Indian dance, and music, to keep in touch with their roots. As a result, every time there was a multicultural event I always got involved. Then I volunteered to help at Commonwealth Games and actually became the assistant stage manager for the Indian performers in the opening and closing events. I also became involved with a Victorian Government initiative for domestic violence in migrant communities – a group I’ve been involved with for many years.

At the moment though, I’m taking a break from all the community activities, because we’ve got a little granddaughter to look after! My daughters are now all grown up and are happy and successful – the elder one is a dentist and the younger one is a lawyer. They love being called Australian but they also hold on to their roots and their culture.

My brother’s here now too, and my husband’s sister, nieces and nephews. Ten years ago, my parents came here as well. Sadly, my dad passed away a few years back. But before he died, he just loved being here. He was like an ambassador for Australia. Whenever he went back to India, he would show everybody videos and say, ‘See how good this is. You should come as well!’

Originally, I said we were only coming for one year. Then I said, Okay, two years. Now it’s been almost 30 years! So this is home. I feel I’m on the other side.

Now I am the Australian who is there to welcome the next generation of migrants, to try to give back what was given to us.

Arrived 1992
???? Would you like to capture the life story of a beloved family member? Now offering personalised private story-crafting services to help you create a family heirloom that can be treasured forever. ❤ Find out more at: www.newhumansofaustralia.org/storycrafting