(Part 1 of 2) Armed struggle started in Eritrea in the month I was born. Growing… 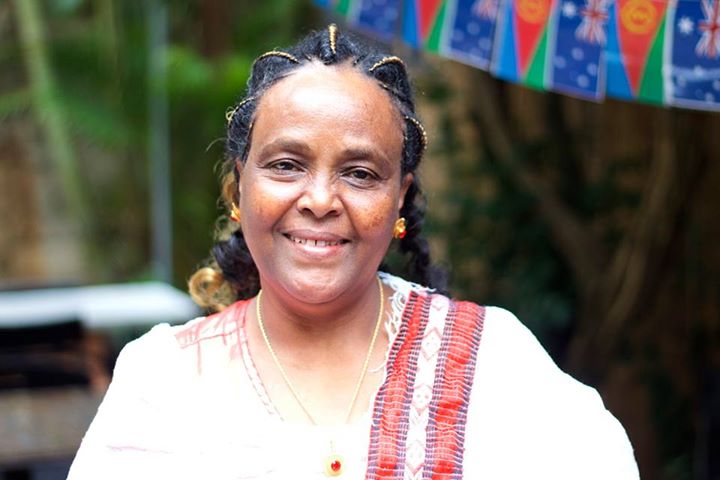 (Part 1 of 2) Armed struggle started in Eritrea in the month I was born. Growing up, I remember we had to avoid the Ethiopian soldiers because they would rape you and kill you if they saw you. Most of my family was influenced by politics, including my older brothers – and I was the only girl out of seven boys. As a result, when I was 14 years old, I asked to join the Eritrean Revolution front. They wouldn’t accept me as a fighter because of my age, but I became involved in underground activities like distributing flyers and collecting money for the revolution. My first question after I joined was,‘Is there a women’s movement?’ and they were surprised, because of my age! They said, ‘Why are you asking?’ And I said, ‘I want to see, in a free Eritrea, a free Eritrean woman as well, and until I see that, I won’t feel we are free.’ So they agreed to ask the women fighters if they were interested, and we established an Eritrean’s women’s union.

I was strongly influenced by my mother. Even though she never learned to write, by nature, she was very wise. She was religious but not conservative, and she had her own interpretation of society, which was very rare at that time. She wanted to know everything – when she visited different places, she always wanted to know all about their culture. She was never biased against any other religion or ethnicities. She always said, ‘Humans are humans, whatever their colour’. That was the base of my life.

When I was 18, war broke out, and I was able to fully join the Eritrean liberation movement as a soldier. I had 3 months’ political training, and I had to carry a gun, although I continued my work in the women’s union. For more than a year, there were 3 different wars going on against my organisation, unfortunately we defeated. However this war was also an international war and, unfortunately, because we stood for democracy and social change, our organisation were seen as Communists aligned with Russia, so the Americans and their allies in that region were against us. As a result, we were defeated and pushed to the Sudanese border, where the Sudanese government disarmed us. As a result, I became a refugee, at the age of 20.

I didn’t want to be resettled to another country such as Canada – I wanted to continue to fight to get back our country, and as soon as my organisation was allowed to open an office, I was able to continue my struggle. Then, a year later, I had my daughter, and life became a little harder. In the end, my husband and I moved to the capital, Khartoum, where he got some work as an English teacher. We were surviving, but there were about 20 of us fighters living together in one room, and if we got something to eat, whether once or twice a day, we were happy. Then, my husband went to work in Saudi Arabia, and he was able to help us more.

Eritrea became independent in 1991, and suddenly Sudan became dangerous for us, because both governments started working together to kidnap and kill off their opponents. We received a warning that if we didn’t stop our opposition to the Eritrean government, our life was at risk, and they also started to confiscate our property. At that point, I realised that our struggle would not be short, that freedom and democracy would take time, and that I had to think about my daughter as well as myself. So 10 years after arriving in Sudan, I decided to look for a life where I would have peace.

With the help of the UNHCR, my daughter and I were taken to Cairo. That was tough as well because the Egyptian government at that time wasn’t taking more refugees, so I had to live there in hiding. My husband tried to come to live with us, but he was caught by Egyptian security and deported, and I couldn’t try to find out where he was, because I would have been deported as well.

Finally, about a year later, the Australian government sent a delegation to Egypt to find out why there were still Eritreans seeking asylum, and I was one of the people who spoke to the delegates.

This created a connection, and within a short time, I was accepted to come to Australia.

Thank you so much to those who signed up last week. 🙂 If you would like to join the fabulous supporters of the New Humans of Australia project, why not become a patron, from as little as $1 per month! To find out more, please visit: https://www.patreon.com/nicolagray