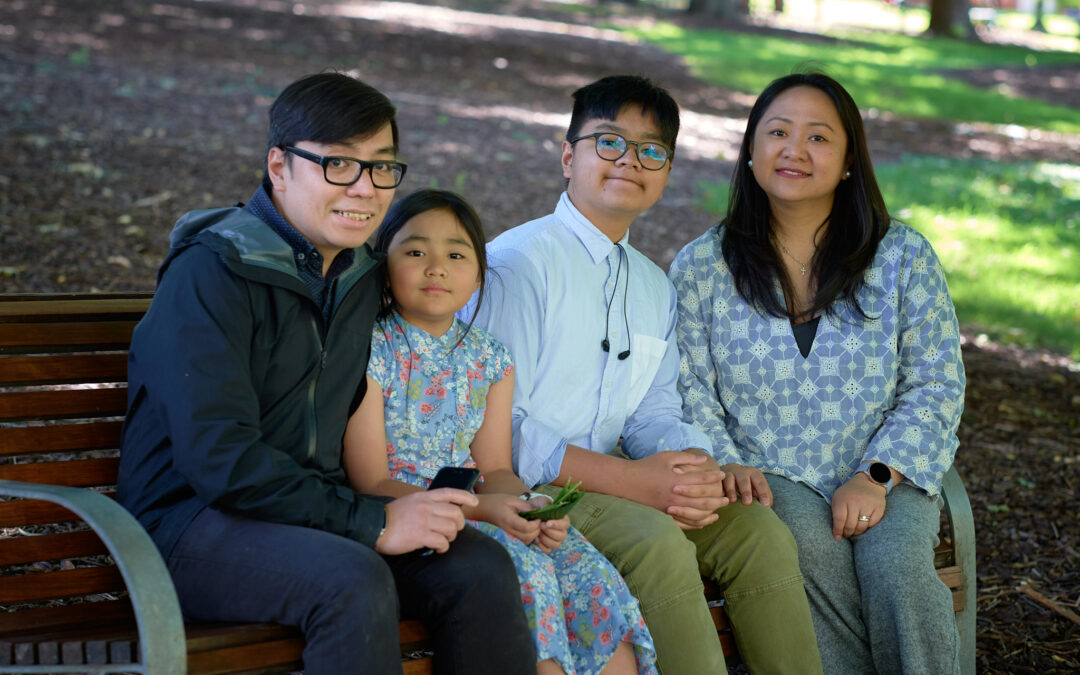 Our son was only 2 years old when he was diagnosed with leukaemia. It started off with him hitting his head. And then the bump didn’t resolve properly.

I had just got my license as a registered nurse so I knew that something was wrong. But I was too scared to face up to it. Then it came to a point where I couldn’t ignore it anymore. His gums started bleeding, and he was very pale. That started our four and a half years of chemotherapy.

A lot of things happened that were very traumatic as a parent. As a 2-year-old, my son didn’t have enough veins for needles, and one time they had to try to insert a needle 42 times. They also had to remove all his teeth to prevent infection during chemotherapy, and because they couldn’t insert an IV line for anaesthesia, we had to watch him getting injected through his legs every 15 minutes. It just killed me.

In Australia, healthcare is free. But in the Philippines, if you get sick, you only survive if you have money. And as a young couple, we ran out of money fairly early. So after 4 months, we had to go from a private to a public hospital where you paid for everything, even to use the elevator.

I decided that I would nurse my son myself. One day, I could see his smile wasn’t quite straight. As his mother, I knew something was wrong but the interns wouldn’t believe me for some time, until eventually they realised he was having a stroke. Because it was a weekend, there were no X rays or MRIs available. So I had to drive him to a private hospital, with my husband carrying my son in the back and an intern holding an IV.

After the MRI, they told us we needed to say goodbye to our son because he would soon be having another big stroke. Just imagine after 5 months of chemotherapy how we felt to hear this.

When we drove back to the hospital, my husband and son went in first while I went to park. And once I was alone, I just totally lost it. I felt like it was a thin line as to whether I would go crazy or not. But then I told myself I needed to be there until the end.

When I went into the hospital, it was dark, and I felt so small and hopeless. But there was this woman in front of me, and because of the way she carried herself, I felt this sense of anticipation. Next, she got out of the lift on the same floor as me and actually went before me into my son’s room.

There I saw my son surrounded by all the interns and doctors. And he was pooping, which meant his cycle had started again. He looked up and said, ‘Mum, feed me I’m hungry.’ That lady who had come in turned out to be the head of neuro-paediatrics from a big private hospital. She said she had heard about my son and was there to offer her services.

Afterwards, she came to me and said, ‘We’ll take it day by day to monitor him. But you are the mum, you are the strength of your family, and your son will only be as strong as you are.’ That made me feel like I could move mountains. I will never forget that. And from that day on, my son got better.

After a few months, I decided he was strong enough to go through chemotherapy again. But I didn’t want to be left in a situation where I wouldn’t have enough money for him to be treated. We would need hundreds of thousands of dollars. As a result, I applied for a student visa to try to find a way into Australia.

On the day I was supposed to fly out, I still hadn’t received my visa. My lawyer said maybe they had found something in my blood tests. I felt so heavy and sad, but my dad told me not to cancel the ticket, that something might happen. And sure enough during our conversation, my visa arrived. Two hours before my flight was leaving! I was rushing so much I didn’t even have time to say goodbye to my son!

After doing a Certificate in Nursing in Australia, I spammed my resume to everyone to try to find a work sponsor. At first, I found work in a hospital but it was too traumatic for me, so four months later, I found work in an aged care facility. With that job, I was able to pay for my son’s ongoing chemotherapy, and to slowly pay off my debt to my mother.

A year and a half later, when my son’s treatments became less demanding, I was able to bring him and my husband over to join me. Because of his illness, I could only bring my son on a tourist visa, so every three months for two years, he went back to the Philippines for his chemo.

By the time he was starting primary school, he had finally finished. And I was able to apply for permanent residency with him as my dependent. The first time he had a blood test here and I didn’t have to pay for it, I actually cried!

My son is now a normal, frustrating 15-year-old! I also have an 8-year-old daughter. We have our ups and downs like everyone, but we’re a close family.

For the last 9 years, my husband and I have hosted newly arrived families from the Philippines in our home until they could stand on their own feet. We have now hosted 32 families, and some stayed with us for years. We wanted to invest back into the community, and now we have a wonderful social circle.

I eventually became the manager at the aged care facility which sponsored me. We just went through 42 days of lockdown in our facility, and I spent most of those days working 12-hour shifts. It was really tiring and emotional. But I just pushed through it. I’ve learned how to do that.

To just keep on going.