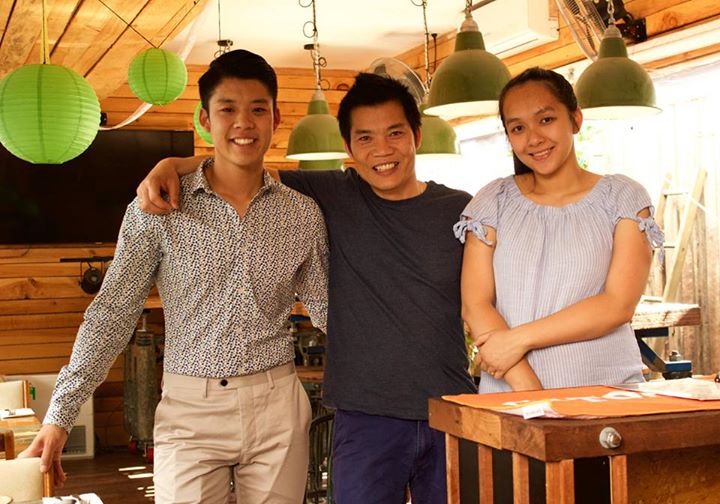 My tummy was never once full in our whole life until two years after we came to Australia. Our family was from the poorest place in Vietnam that you could find, and when I was growing up, most of our food consisted of stuff collected from the side of the road, if you could find some. When we went to a party, even if we hadn’t eaten anything all day, we would tell everybody that we were full – that was part of the tradition, because nobody else had any food either.

I still remember the best meal I had as a child was when my mom gave birth to one of my younger brothers. At that time, women who had given birth were given one egg, and my Mum shared that egg with all the family. It went into two lunches and a dinner for all of us!

When I was 8 years old, a few brothers and I escaped in my oldest brother’s boat with about 40 other close family and friends. It was all hush-hush the planning because there were a lot of people getting imprisoned or executed for trying to escape the country at that time – this was after the Vietnam war. So before we left, we were all hiding in pig pens, stables, and underneath the beds. For me, it was like an adventure.

After 3 nights at sea, we reached an island named Bidong, where we were eventually interviewed and accepted as refugees to Australia, to be settled in Perth. But even after we arrived here, we still didn’t eat all that we had, because we had the mindset that we had to save food for the next day. Even when we went to family events, we didn’t eat! Finally, after two years, my brother, who we looked up to as our father, told us that it might be okay to accept some food.

I’ve done a lot of things in my life. I’ve been a DJ mostly, and then I owned a nightclub in Adelaide, but when my son was born, I wanted to change my lifestyle so I became a carpenter. Finally, I decided I wanted to open a restaurant, to make sure that my children would always have food to eat.

While we were waiting for the development approval, my son and I did all the building work we could in our spare time, and when we got the approval through, I stopped the work that I was doing outside and worked every day here for about 9 months, only bringing in tradies when I needed to. Then, tragedy struck. Firstly, when we were about 3 months away from opening, we completely ran out of money. I wasn’t working, I was behind with my rent, I was behind with my mortgage – the only person that was working was my wife, 7 days a week, in a nail salon. I didn’t know what to do, and I told my son we might have to give up on our dream. Then we found out my wife had cancer, and the doctors told her she couldn’t have another baby. When we found out, we just cried and cried.

But I told one of my friends what was going on, and what happened next was amazing. All my friends came together, and started to work on the restaurant for free. They came here day and night, even buying materials with their own money. I didn’t know how I would pay them back, but they told me it was their gift to me and my family and within 3 months, we were able to open Phonatic.

Then, just before our opening, we found out that my wife was cured of cancer. Now, she has just had our last baby boy, Jordan. Through all of these experiences, my son Brendon and I have become the best of friends, and my wife – now, she’s my soul mate.

We’re very happy here, and our motto is, ‘You come in as a customer but you walk out as a friend.’

If you’re in Adelaide, check out the tasty food and amazing decor at Phonatic on Hindley St.