My husband and I got married and seven days later we landed in Sydney. Neither o… 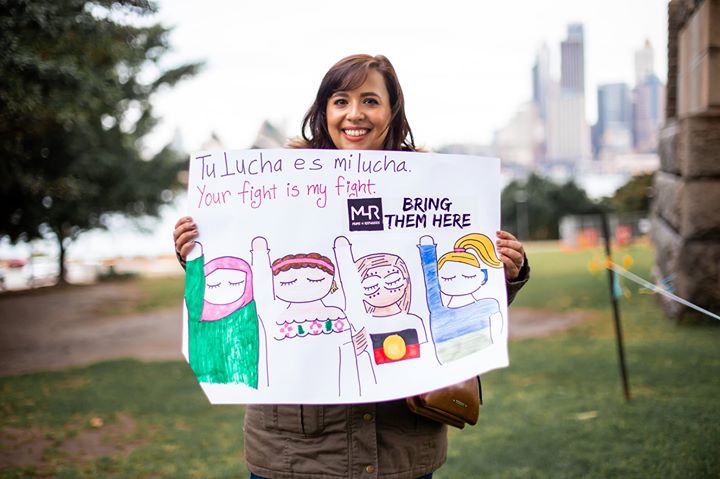 My husband and I got married and seven days later we landed in Sydney. Neither of us knew a soul and it was such an adventure.

He fell in love with Australia as soon as we arrived and wanted to stay here forever. But I was thinking to myself, ‘What have I done?’ In Mexico, I had already built a life. I was 27, and I’d just finished my degree in Communications, majoring in Women’s Issues, and I was working to support women’s rights in Mexico city.
But now I felt like I was starting from the beginning, and it was a big shock. I also felt like I couldn’t find my tribe in Sydney.

Three years later, my child was born. At first, my mum came from Mexico but then she left and boom! I didn’t have any family here, and all my friends were still single. It was a hard time.

My child was born with a club foot. It’s really common – nothing major. But I remember at the time the pictures of babies on Nauru started coming in, and I was like, ‘Oh my god, I’m a migrant, and I have all these facilities and everything was covered by Medicare, and we were taken care of with such kindness.’ And these people in Nauru were exactly the same colour as I am and they were mothers too, who were trying to come here to give their children a better life, but they were living in these mouldy tents. I realised I had to do something.

That’s when I became part of Mums 4 Refugees, and it changed my life completely. It really opened my eyes. And it made me realise that no matter where you are or where you’re from or what’s happening in your life, motherhood has this way of simplifying things. I went along to my first rally like a little deer in the headlights, and I ended up falling in love. I had always been very political, and drawn to social justice causes, but I just hadn’t found my cause in Australia.

We started with a small group of mothers in Sydney which grew and grew, and we now have 3,647 mothers around Australia in our group. We do absolutely everything, from direct advocacy, which means we buddy you up with a family of asylum seekers, and you work with them through the process, helping them out and learning their stories and becoming an advocate; to material aid, where I might, for example, receive phone calls from social services telling me that a mother can’t feed her baby or they need diapers or something, and I gather my mums to go get it. Then there are extreme cases of abuse where we work with human rights lawyers, like the National Justice Project. We’ve taken on big things – we’ve taken Peter Dutton to court many, many times, and won – and this all comes from mums.

Sometimes I feel that mothers are stereotyped, but we are game changers and we do amazing things – we get political and we rise and take on challenges. My group is formed from the most extraordinary ‘Aussie Aussie’ girls, to the new Mexican in the town, to newly arrived refugees. What brings us together is motherhood and our connection with those mothers who are crossing oceans and who are stuck somewhere. I am now the National Convener of the group, and I feel very glad that I can make a difference in this small way. It’s been really cool to get in contact with these amazing people. It’s been incredible.