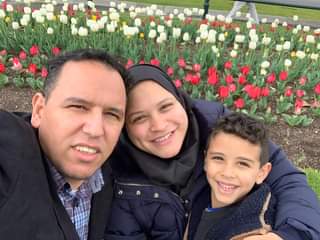 My father wanted me to go to medical school. But I don’t like biology, or blood. We had arguments. I told him that it was my choice. In the end, I went to study engineering. In my second year, I chose to specialise in power mechanical engineering, where only about 1% of students were female.
Every summer, I would attend training, and after one training, the manager said, “Sarah, you are so talented. We need more females to work here.” I said, “After I obtain my degree, for sure, I will come to you.” And I did.
I met my husband in university. He offered to help me one day, and I said, “No.” I was so rude to him! The next day, I went and apologised, and after that, I let him help me! But in Egypt, you don’t ask someone to marry you while studying, because you still have nothing. So he waited. One day after I had graduated, we met each other again by chance. And he said, “I’ve loved you from the first time I saw you.”
I worked for 7 years. When I was pregnant and had to stop, I decided to do my project management diploma. I actually gave birth to my son a week after I finished the first semester!
In 2017, there was massive inflation, and suddenly all our savings were worth nothing. As a result, we decided to apply to come to Australia as skilled migrants.
When I learned we had been accepted, I had mixed feelings. On the one hand, I felt happy, but on the other hand we didn’t know anyone in Australia, and we didn’t have much money. We sold our car, jewelry, and even borrowed money from my family. Then we booked our flight to Darwin, as it was the state of Northern Territory that had granted us the visa. It was a bit of a shock when we arrived, as we had been expecting something different!
The first challenge for any migrant is to find an apartment without a rental history. As we arrived in high season, we had to stay in a hotel for two weeks, which used up 15% of our savings! Finally, we found a small apartment, and bought everything, even our appliances, second hand.
Then I started looking for work. I not only applied for any job that came up online, but I also printed my resume, and went in person to every engineering office in Darwin. But I had no success, and soon our money was running out.
As a result, I had to look for casual work, which I had never done before. First, I did some random jobs. Then I got a car detailing job. But after a couple of months, I was offered a temporary job as a project engineer. When I found out, I was over the moon! But that job only went for 4 weeks, and after that, I went back to the car detailing job. The owner at this time was very sick, so my husband and I created a company with an ABN and took over the business. We worked every single day, but we made good money, and life was less stressful.
Not long after that, a recruiter told me there was a position available for a project engineer in Castlemaine, Victoria. I travelled down and after I went through all the interviews, HR said, “Sarah, they are very impressed with you. When can you start?” I said, “Now!” I’ve now been in the role for 2 years, and I really like my team, which is very diverse.
We chose to live in Bendigo, which we like a lot. Sometimes people look at me strangely because I wear a headscarf. But I love being different. This is me. I believe we need to accept each other as we are. Although I miss my family and friends, I have made new friends here, and there is a much better work / life balance.
My husband and I have faced a lot of challenges, but I think it’s important to challenge yourself. You don’t know how strong you are until you do.
Sarah
Egypt
Arrived 2018
Read more great stories in the beautiful New Humans of Australia coffee table books, the perfect gift or conversation starter: www.newhumansofaustralia.org/shop
#migration #Egypt #Bendigo #Australia #newhumansofaustralia #storiesnotstereotypes