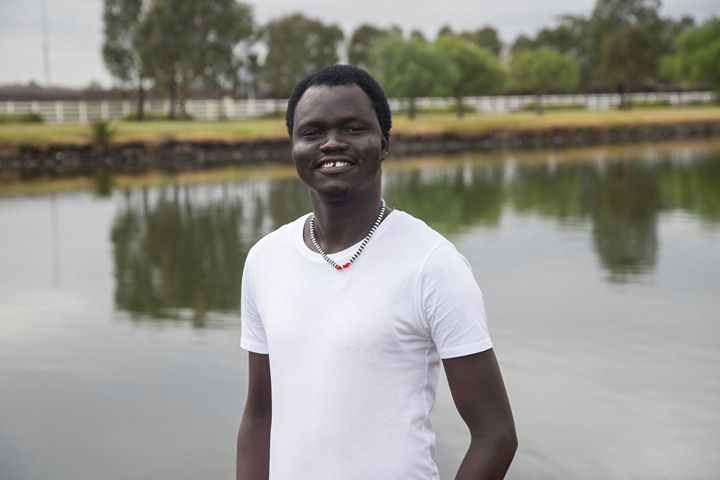 My Dad was killed and my 7 year old sister was abducted when our village was attacked. But my mother, my second sister and I got away together.

We walked for a long time to get out of South Sudan. For two years, we trekked, then rested for a few days, then walked again. Finally, we reached Uganda, and from there we went in a vehicle to Kakuma, a refugee camp in Kenya, where I lived for nearly 25 years.

School in the camp was good. There were some things that were not alright but we appreciated it because we knew nothing before and it was our first chance for an education. But it was hard for our mothers to buy the stationery. If we needed books, our mother would have to sell a portion of our food, and we didn’t have very much food.

Eventually, my second sister married a wonderful guy, and they were approved to come as refugees to Melbourne in 2005. After that, she was able to start sending us some money.

My sister who had been abducted had never stopped searching for us, and one day she found out we were in Kakuma. When she connected with us, my Mum went to see her and then she came to live with us in Kakuma. She had been married off for the dowry payment and had three children. At first, she had to leave her children behind. Then, because of my sister’s money, she was eventually able to bribe her husband to give up the children one by one so that they could come and live with us too.

In 2013, the six of us applied to come to Australia. I felt so happy when I found out our application was successful, as we had never been together as a family since our village had been attacked all those years before.

My first impression when I arrived in Melbourne was of a land of opportunities. I had never been with many people apart from my own people and it was a good experience. I already spoke English, and I wanted to go to school, but first I had a responsibility to work, so that I could pay for my cousin and my nephew’s university fees in Nairobi. At the moment, I’m working in a factory for a food processing company who supply KFC and McDonalds. It’s tedious and tiring, but hopefully by next year I’ll be able to study. I’d like to do Nursing because I like helping people. Besides that, I believe I’ll get a good job.

I am also one of the leaders of the Twic East Youth Association in Victoria, which is about bringing the youth of our community clan together. We meet over the weekend, trying to identify who is cutting school and trying to encourage others to do well in school by giving them best performers awards by the end of the year. Because there are many South Sudanese parents who may not have had any education, it can be difficult for their kids to do their homework, so we also help with that. I wish the media would also show stories about the young Sudanese boys who are doing well in school and sports, because they are not all criminals like what is shown.

My story now is all about my life here in Australia. If a migrant decides to come here, they should come to live the Australian life and do what will benefit their future. It’s all about bringing the best out of yourself and Australia is one of the best places to do that.

Would you like to offer your support to New Humans of Australia on an ongoing basis? For as little as $1 a month, you can become a patron and get all stories direct to your inbox. Or become a strong supporter for only $15 per month and get a free copy of the amazing book! Whatever you choose, it all adds up and helps me to do my work. Thank you to all my patrons, supporting the arts and supporting social change! ❤️❤️❤️