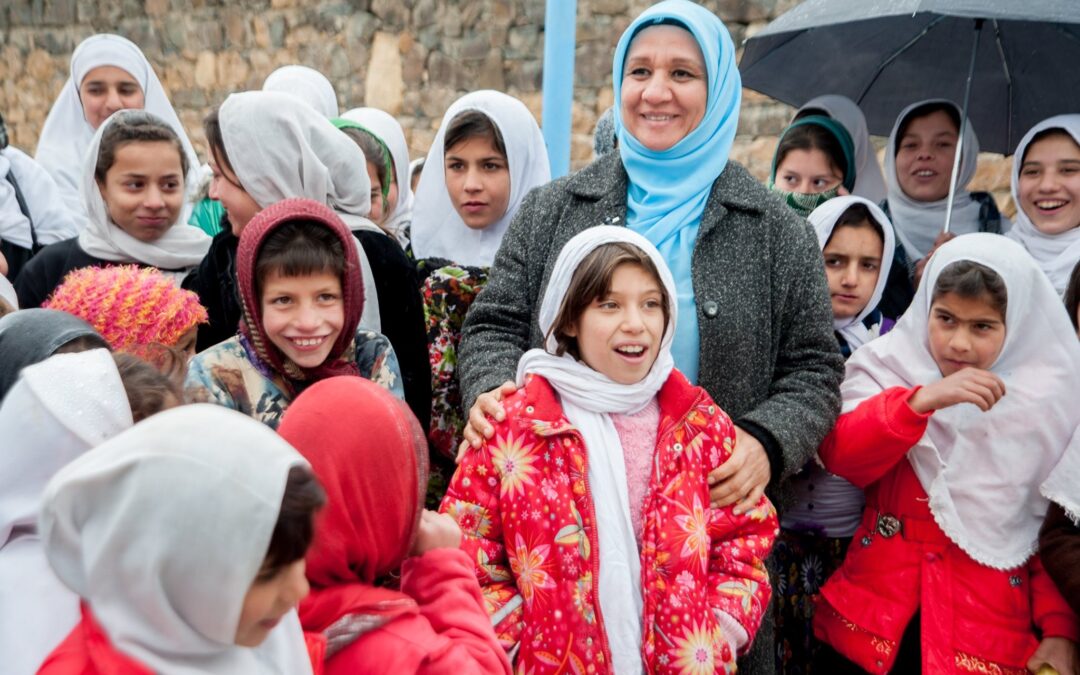 I grew up in Kabul with nine brothers and sisters and forty cousins who all played together, fought together, and laughed together. When I was young, Afghanistan was a peaceful country, but when I was 10 years old, Russia invaded, and suddenly we saw soldiers in tanks on the streets. At my school, the year 12 girls regularly led protests against the invasion which they started by ringing our school bell. However, as I got older, all these girls disappeared. So one day, after the school bell was silent for a few weeks, I jumped from the window and rang that bell, and I kept ringing that bell for 3 years.

By doing that, I put my life, and my family’s life, at great risk. I was physically abused many times by soldiers. They used tear gas and electric sticks on our legs. My family wanted me to stop but I never did and I don’t regret it because I feel I did my part for my country.

One day, the police came asking for me, but my father told them that I had died. After that, I fled to Pakistan with about 40 other people, including my uncle’s family and my grandmother. Sometimes they brought a car where it was possible to drive, but otherwise we walked. It was not easy crossing the Khyber Pass, as we had to walk from one mountain to another.

In Pakistan, we lived in a refugee camp, the six of us in one room of a house. Pakistan wasn’t dangerous, but we didn’t have a life there. We were just passing time with no idea of our future. A lot of the time, we girls were kept at home, and when we went out, we had to cover our faces because, coming from Afghanistan, we were considered very pretty. I had two years of that and could not cope, so when I was 16, I decided to try to walk to India to start a new life.

One of my brothers who worked in Iran came to take me across the border. It was a long and scary walk. When going into India with no passport, you pay a smuggler to take you, and along the way, we were constantly stopped by corrupt police officers who ended up taking all our money and possessions.

When we finally crossed the border, we made our way to New Delhi, where we got a room with just one mat in it, and nothing else. For a week, we stayed without food, until eventually we got help from the UNHCR. Then, after five months, an Afghan man with Australian citizenship sponsored me to come to Australia as his wife. At that time, I was eighteen.

The first time I put my feet on Australian soil, I fell in love. I woke up with blue sky and sunshine. For months, I enjoyed seeing women driving cars and playing sports and enjoying the freedom of being a woman, which is now my freedom. It affected me in a positive way and I really got along well with the Australian community and the Australian way of life. I kept my religion and tradition and my culture, but I would say that I became an Aussie.

I studied English, followed by a Diploma of Community Welfare and I then started working with Afghan women to empower them, providing them with services like swimming classes and English lessons. I was happy and I forgot about the situation in my country.

But after 3 years tragedy struck, when my first son went away for the first time to visit family in Wollongong. They went to the Kiama Blowhole to take a photo and a wave came and washed them all away and all seven people died.

That was the most difficult thing in my life. It was a huge shock, and I was in severe depression for three years. In that time, I eventually found my peace and healing through praying and talking to God. I also had another son, but soon after, my husband and I grew apart and separated.

Finally, one day I decided to take my pain and turn it into strength, making a promise that I would dedicate my life to changing the lives of children in Afghanistan. The first thing I did was to sell all my jewelry, and I then established my first orphanage for 30 Afghan children in the Jalozai refugee camp in Pakistan. But I had to keep sending money, so slowly I sold every single expensive thing I owned.

Then one day a friend, Karen, came to the house and couldn’t believe all my furniture was gone! After that, she taught me how to fundraise properly. At our first event, we raised $10 000, and with that money I built my first school, big enough for 800 students.

Since then, Mahboba's Promise has established schools for girls in places where there were no schools, set up health clinics in remote villages, created vocational training programs for women and youth, and built four orphanages, which are called Hope Houses. Children come in as street kids, and the first thing they do is plant a tree, for a sense of belonging. We provide them with clothing and food, and a school where they learn to write and use computers and speak English. They are so happy to have a place to call home!

I’ve now been running my charity for 23 years. It hasn’t been easy, but many wonderful people have helped me along the way. And it is unusual work – beautiful and rewarding.

I wouldn’t change a thing.

Help transform the lives of girls and women in Afghanistan by donating to one of Mahboba's Promise sustainable development projects here: https://mahbobaspromise.org/projects-2/