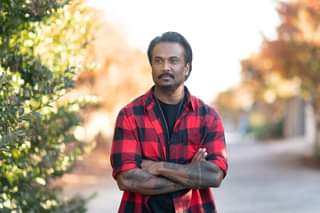 A week from my 12th birthday, I waited for my mum to come and pick us kids up from primary school but she never came. The entire school emptied and I remember just standing there and wondering what was going on. Then we found out that she had been killed in a car accident on the way to pick us kids up from school. She was 37.

After mum died, I remember the adults arguing, then all of a sudden contact stopped and we were estranged from my maternal family. Dad remarried a very religious Hindu woman who helped him back on his feet like no one else. Eventually our house became a Hindu temple, open to all religions. But even though I was around that open environment, I still struggled with my identity because of the pressure I felt to assimilate all or nothing into Australian culture and because of the way Indians were portrayed by the TV and film industry.
I was 5 years old when we arrived in Australia from Fiji. I couldn’t speak English that well and my accent was very strong. At primary school, the kids were laughing and happy around me. When they gave me nicknames, I was so happy because I’d made some new friends. But when I went home and told my mum, she had the horrible task of telling me that those nicknames were actually racist slurs.
Over time, my English got better and my Australian accent stronger. But when I went to speak in Fijian Indian Hindi, I got laughed at because of my accent. As a result, I stopped speaking it.
From the age of 7, I got into playing Aussie Rules football and later I became obsessed with St.Kilda player Nicky Winmar because he had brown skin like mine and was an incredible footballer. But I copped the “N word” so many times. Back then there was no ‘brown’. I was called black, particularly because I had dark skin.
I started to listen to artists like Ice Cube, NWA and Ice T who were resisting the same racial slurs. As a result, I took on this identity where I thought of myself as black. Later, I had dreadlocks and often got told I looked like an Islander, which I didn’t think was that far a stretch since I was born in Fiji. So that also became part of my identity. But I was still hiding away from being Indian.
Then, when I was 36, I found out my maternal grandmother, who I thought had passed away years before, was actually alive and waiting for me in the same house in Fiji. At that moment, I knew I had to go and see her.
Six of my grandma’s eight children had passed away. So when I was meeting her again, I knew I wasn’t just meeting her as a grandson, but that part of her precious daughter was also returning. And the moment I met her, I knew exactly why I was the way that I am. Because I’m a carbon copy of her.
My grandmother reconnected me to my language, my culture and myself. I was a 36 year-old man, but in front of my grandma I was that young boy meeting her for the first time, because my life as a child had stopped when my mum passed away.
My grandma instilled in me that I was enough. That I was born in Fij, with Indian heritage and that I was uniquely Australian. That I was her grandson and her blood flowed through my veins. That she loved me and was proud of me. And I would tell her she was my grandma, my best friend, my mother and my everything.
I was good at acting in high school, but in our family acting was not considered a real job so I went into event management for many years. I started using YouTube to promote my events, and as I was doing that, an acting agent I met said I’d be great in front of a camera. After that, I started getting odd acting gigs. This was well before diversity was a word used in the industry and I’d be given scripts that were outright racist. Sometimes I was great at acting but also inconsistent because of nerves.
But from the moment I met my grandma, my acting and storytelling just aligned because I felt I had found my truth. After that, I started finding out more about my Indigenous Indian culture and connecting with Indian elders around the world. I also created a TV & film production company, Warrior Tribe Films, which champions authentically diverse stories. The logo is the same tattoo that my grandma and I share. After I got that tattoo, I wanted to show my grandma but I didn’t get the chance. After five incredible years together, my beautiful grandma passed away half an hour after I landed in Fiji.
I’m now developing a feature documentary called Five Year Grandma, which has received development funding from Screen Australia. Its pitch video has had well over half a million views on Facebook. Incredibly, I’ve got grandmas around the world watching the video and saying that I’m a wonderful grandson and that they’ll be my grandma. It’s just the sweetest thing!
This year, I was selected for the Film Victoria Screen Development Internship. I’m now creating a body of work as a service to my community, and to ensure my grandma and mum are never forgotten. I want to show younger generations that they don’t need to be ashamed of their culture growing up and that they don’t need to ostracise it to be an Australian. They don’t have to choose a side, they can have both.
Ravi
Fiji
Arrived 1982
Photographer: Michelle Radcliffe Pause The Moment
Read more great stories in the NHOA coffee table books: www.newhumansofaustralia.org/shop
#migration #Fiji #India #Australia #filmvictoria #filmmaker #grandma #inspiration #newhumansofaustralia #storiesnotstereotypes