5 years ago, while I was working in my uncle’s hotel in Aleppo, we had an Austra… 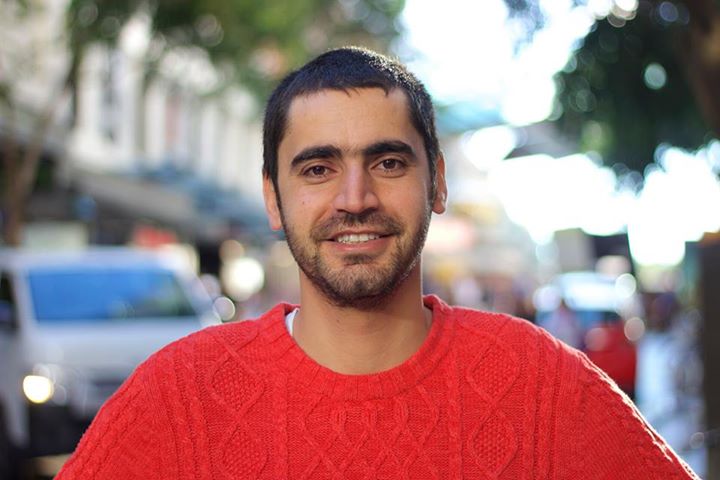 5 years ago, while I was working in my uncle’s hotel in Aleppo, we had an Australian guest called David come to stay. One day, he broke his leg when he fell on the street. As a result, I went to the hospital and later, I brought him back to the hotel and took care of him while he recovered. We chatted a lot – he was a very nice man, in his early 70s. And in the end, he offered me some money as a reward for taking care of him, but I refused, which he really appreciated. We exchanged email addresses, and he went back to Australia.

After a while, I sent him an email asking him how he was feeling. He wrote back, and soon, we were writing every day. It was a good way for me to practice my English! Then, one day, he suggested I come to Australia for a visit. At that time, things were just starting to change in Syria, and the hotel was getting quieter, so I thought, ‘OK, why not, I’ll give it a try.’ I went to the embassy in Jordan to lodge my application, but a month later I was told I didn’t meet the requirements for a visa. So I thought, ‘OK, no problem. I’ll stay in my country.’ But when I told David that I couldn’t come, he said he would stop in Jordan on his way back from England that year, and go to see the ambassador with me. So a few months later, I crossed the border again. This time, it wasn’t easy. Aleppo wasn’t experiencing any problems, but in the South, I saw what was going on, and it was really bad.

When I got to Jordan, David and I went for lunch. He told me that he lived alone, that he was a little bit lonely, and that he wanted to show me Australia as a way to repay me for taking care of him. Then we went to the embassy. David told the ambassador he was a senior lawyer at the Mental Health tribunal in Australia, and the story of how we met, and this time, my visa was approved!

We flew together to Australia, where he showed me Brisbane, Sydney and Melbourne, and introduced me to his sister, who was married but didn’t have any children. They both treated me just like a son. Then, just a few days before I was due to leave, my flight was cancelled because the Aleppo airport had been closed down. As a result, I was stuck in Australia. I couldn’t believe it. It had never been my intention to stay. But we went to a migration lawyer, who told me I could apply for a protection visa. David paid all the fees for me, which I was very grateful for.

After that, David and I lived together like family. Everywhere we went, we went together. He helped me find my first job washing dishes, and later on I worked as a chef. Three years later, I met my girlfriend, but I still didn’t leave him – I went to her house at night but during the day I would stay with him, because I felt it would be unfair to leave. He had done so much for me. He even took me to see my family in Turkey because he knew I missed them. And all he wanted in return was company.

David said he really wanted me to have a good career, and suggested that because I was a caring person, I should study Nursing. But I said I would just do a Certificate in Aged Care to start with. I had the idea that it would help me to take care of him when he got older.

Then, last year, he got pneumonia. Whenever he went to hospital, I went with him – even when I had to work, I would take time off to be with him. One day, he had a blood transfusion in the afternoon, and after we went home, he said he was tired and wanted to sleep. I went to see my girlfriend, but a few hours later, he called, and said, ‘Can you make sure I see you before I go to sleep tonight?’ I said, ‘OK’, but by the time I got back, he was already asleep, and I didn’t want to wake him. Then, when I got up in the morning, it looked like he was still sleeping, so I left the house to go to school, but by 8:30, when he still hadn’t texted me, I said to myself, ‘Something is not right’. So I went back to the house, and tried to wake him up. Then, I knew he had passed away.

For me it was a huge loss. My father died of a heart attack when I was 5, so I looked at David as a father. And David never had a child. He used to say, ‘If I had a child, I would want him to be like Ahmad’.

It’s been a year now since I lost him. His sister and I still meet for dinner twice a week, and I’m renting David’s apartment from her. I don’t want to change anything there, not even the sheets. And I’m now working in a nursing home, where I look after the residents very, very well, because for me, all the residents are David.

Next year, I plan to study Nursing.

I know my story is unbelievable. But I believe in one thing – if you do something good in your life, it will come back to you, maybe not straight away, but it will come.

Would you like to help change the way Australians think about refugees? Join the wonderful supporters of the New Humans of Australia project at: www.patreon.com/nicolagray