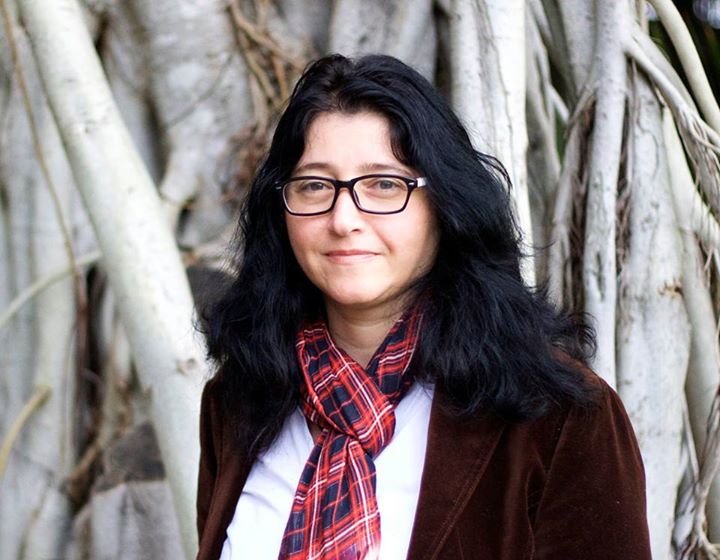 (4/9) Even the brother of the president threatened that they were going to kill me. He sent someone to my work to tell me, ‘You will be killed now or later, and this is a promise’. Then, they put a show on Syrian TV accusing me of collaborating with some foreign power, and started a smear campaign about us on social media. Next, some of the actors were beaten up in the street. It was a horrible time. I was crying every day. Finally, five of us got a call from a friend whose brother was close to the president somehow. He asked us to come to his home because he had a very important thing to say.

When we got there, his face was yellow and he was shaking. He said to us, ‘The president himself feels wounded by this statement. He is very angry and I don’t know what he is going to do. Rima, you are in a serious, dangerous situation. My brother wants the five of you to write a statement and put it online to apologise for what happened. And he doesn’t care if you, Rima, sign it or not because you will not be included in the amnesty.’ Then he said, ‘You need to say that nothing happened in Daraa and that you tricked the other actors and put their name on your facebook page without them knowing. And that you are apologising to the entire Syrian army and to the Syrian people.’ My friend said, ‘I am not going to sign this.’ He told her it would be really serious if she didn’t. But the others said no because she said no. That night, we were afraid.

Next, some famous actors invited us to a hotel to discuss what we were going to do. At that meeting, everyone was crying, and I started feeling guilty, because they were very good people, and my friends, and they were just actors. I said, ‘I’m going home so you don’t feel pressured. Do whatever you need to do to get out of this problem and I will forgive you.’ Then I left. At 2 am, they called and said they were coming to my house. When they arrived, they took away all the mobile phones because they had discovered that their whole meeting had been bugged. Then they said to me, ‘We are not going to accept any excuses. They want us to appear tomorrow on Syrian TV, with you, to apologise to all the Syrian people for making a huge mistake and if we don’t do this, we will be killed, all of us.’ So I said to them, ‘OK, you will take yourself out of this problem, but what about the 1400 other people who signed? Take yourselves to the TV, but I am not going’. They said, ‘But this will not take us out of the problem – they want you. And also they want us to publish a statement now on our Facebook pages to apologise’. I said, ‘I am not going to publish anything on my page. Sorry, I can’t do it’. After they left, I felt like I was going to have a nervous breakdown from all the pressure. I hadn’t slept for 15 days.

The next evening, I watched the 5 actors on TV trying to convince the people that they had made a mistake, but they couldn’t do a good job because they were being forced to say something that they didn’t believe. After 10 minutes, the show was cut. Later, I went to see one of them, my friend. She was crying and told me they had been beaten for not being convincing enough. ‘Now we don’t know what to do,’ she said. I felt so guilty.

Then, I got a phone call from another friend. She said, ‘Rima, if you don’t show yourself on TV, we will all pay the price, so I am begging you. I have children, please think of us Rima’. I started crying, and she said, ‘Please say yes Rima, we have a huge problem!’ So I said, ‘OK, let them call me!’ I don’t know what happened, it was a horrible moment for me. Then the government station called me and said, ‘Are you ready to say the truth now?’ I told him I was. He told me not to cry when I was on air and to try to be calm and convincing. But when they put me on air, the person who was interviewing me was like an intelligence officer, saying, ‘Admit that you were wrong!’ I started saying what they wanted, but then I started crying, and everyone started shouting. Anyway, I read the whole statement, but I couldn’t apologise.

After I hung up, I started to feel like I was nothing. I said to myself, ‘How can I face all those people who signed on my Facebook page, how can I face another sun? I can’t do it.’ That night, I tried to commit suicide. My brain wasn’t working, as I hadn’t slept for so long. I took all my mother’s heart medicine, kissed my two children and put myself in bed. It was the end for me. But I didn’t die. The next morning, my face was swollen, but I was alive. When I got up, I couldn’t find my children, so I was afraid that someone had come and taken them. Then I heard a knock on the door and when I opened it, there was a huge bag there, and I thought it was the bodies of my children. I nearly fainted! But when I looked, it was actually nothing, just a bag from someone who was selling things, and I realised my children were playing outside. A few moments later, another actor came to my house and found me in a terrible state, and she took me to a doctor who gave me some medicine.

Next, an actor who was working with the regime stated at a national ceremony that we were planning to do something bad to the country, and started passing around a petition for us to be put us to trial. But at this ceremony was the wife of a very famous writer. She still carried influence, even though her husband had died some years before, and she knew me and the other actors. She started shouting, ‘What are you doing? You are accusing these clean people of doing bad things, it’s wrong, it’s wrong!’ Then, she called a minister who is now assistant to the president, an important person, and said, ‘What this government is doing is very bad. You will turn the people against you even more. It’s enough, you’ve been torturing these people for a month!’ And the minister said, ‘I don’t think the President knows about this, so let me me call him’.

Of course, that was a lie. But after a few minutes, this actor at the ceremony got a phone call, and he just put the petition in his pocket and left.

This is the fourth of nine posts which will be published over the course of the next week telling the story of Syrian activist, Rima Flihan.