(1/9) 15 years ago, I discovered a lot of corruption while I was working for the… 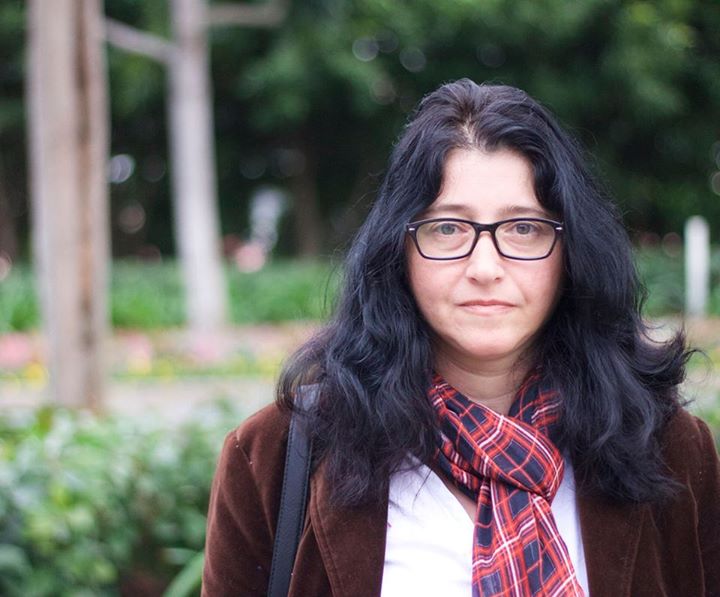 (1/9) 15 years ago, I discovered a lot of corruption while I was working for the Syrian telephone services. The government wanted me to stay silent when I stood up against this corruption, but I wouldn’t. At that time, my children were still under 5, and there was a lot of pressure on me because I really needed that job, but even so, I quit, and said, ‘I will continue to speak about this.’ My husband felt conflicted because people were saying things like, ‘You are the man. Why you are allowing this?’ But at the same time, he supported me, and said I was doing the right thing.

I had studied Arabic at university, but after I left that job, I started studying Law and doing volunteer work. I also started writing short stories and articles about social justice.

As a result, in 2006, I was invited to a meeting for women and human rights activists in Jordan, where I met a very famous Syrian actress. When we met, she said, ‘I have the feeling that I’ve met you before.’ And I said I felt the same way. It was like fate. We spoke about everything. I told her I believed that Syrian TV drama was missing the most important thing – the painful things that the Syrian people were suffering from. And she said, ‘You are a writer. Why don’t you try?’ But I told her I didn’t have any experience in that area, and that I didn’t think I could. One day after that, she invited me to visit her at her home. That day, I gave her some story ideas that I had for a series, and suggested she give them to a screenwriter. She said, ‘Before we do that, I have a feeling that you are able to write this kind of thing.’ Then she gave me a few pages of a TV series script to look at for guidance.

While I was travelling home, I was reading it, and suddenly, I just closed my eyes and started imagining the whole TV series and the characters, and I felt strange, like something was boiling inside me. When I got home, I went straight into my room and locked the door and started writing on my laptop. By 4am, I had written the first episode and sent it to her by email. The next day, she rang me and said, ‘Rima, you lied to me, you’ve written screenplays before!’ And I said, ‘No! This is my first time!’ She said, ‘I can’t believe it, this is perfect.’

When I finished writing, we faced some problems. The TV station didn’t agree to publish it at first. I had to rewrite it three times, and they took a lot of things out. Then, although a private company bought the series, we had to bribe some people to allow it to pass, because it was focusing on all the dirty things that were related to the government or to bad people in the community.

One of the stories was about an orphan shelter in one of our cities, where they were raping and torturing children. I had been there and written many articles about what was happening. I had also gained permission to put the children’s drawings in a gallery, because I wanted to shine a light on what was happening, to make it better. But on the day of the gallery opening, intelligence had come and prevented me from even going inside. When the children arrived, they were crying around me. I told them, ‘I promise you everyone in Syria will see those pictures, in another way.’ So in that TV series, I included those pictures and told their story.

In Syria, when you want to film anywhere, you need to show the script to the government to get permission, so we made a false script so they wouldn’t know what we were planning. It finally went to air on about 18 channels across the region, as Syrian dramas are famous in many countries. After 5 episodes, the president’s wife visited that orphan shelter because they felt very embarrassed, and after that the place changed for the better. Then a minister called me and asked me to visit her office. When I got there, I met with the person responsible for orphanages in Syria. He asked me, ‘Where did you find out all this information?’ And I said, ‘I’ve published articles about it, but you didn’t care. And I believe because you’ve been allowing this to happen, that means you accept it.’ We argued, and I left.

2 months after that, I was prevented from travelling outside the country.

This is the first of nine posts which will be published over the course of the next week telling the story of Syrian activist, Rima Flihan.

Thanks to all new patrons who signed up last week! I couldn’t do this without you. If you would like to become a supporter of the New Humans of Australia project, please visit: www.patreon.com/nicolagray