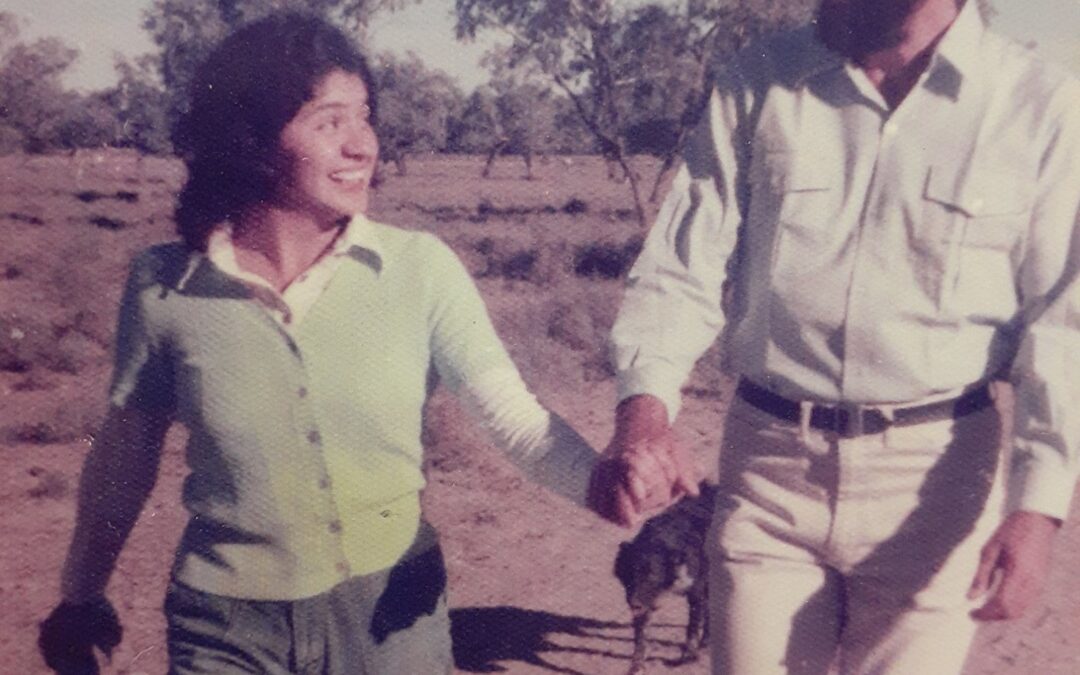 (1/2) In 1974, I came straight from Mexico City – one of the biggest metropolis in the world – to literally the back of Bourke! At my interview with the Australian embassy, the Consul asked me where I was going, and I said, ‘Oh, Bourke.’ I remember he stopped writing, turned to me, and said, ‘Bourke???’

My parents were from a peasant background. But they had come to the city to find better education for us. We're very blessed that one of my dad's cousins gave us scholarships at a bilingual school she owned. It was a very posh school, with children of ambassadors and politicians. At the same time, my dad didn’t always have work, and we lived in a makeshift house at the edge of a slum with dirt floors. As a result, we really got to experience both worlds, high standards of education and very poor living conditions which were both formative, shaping our awareness of social justice.

As a child, I didn't really notice that we were poor or even different to the other children at our school, who were very accepting of us. But because of where we lived, we had the opportunity to see our parents in action, always helping the people around us, including one family of 10 living in a cardboard makeshift house. I remember Dad going to scold a man because he was beating his wife, and Mum helping to clean really bad sores, and showing other mums how to get rid of nits. Because we saw how rewarding it was to help the poor, and how easy it was, the five of us all ended up doing that kind of job later in life, helping people in need and not worrying about getting our hands dirty. When I was 8, we were able to move to better living conditions.

I have very happy and fond memories of my teens. But in 1968 when the Olympics were held in Mexico City, a lot of student demonstrations and activism took place about the fact that the government was using money for the Olympics instead of to relieve social suffering. As a result, all the schools and universities were closed, and I couldn't finish high school.

But in Mexico you start work very young. So, at the tender age of 16, I started working as an English teacher at a private school, a job I loved.

At that time, my sister met an Australian guy who was an anthropologist linguist working with indigenous people in Mexico. It was more or less love at first sight. They got married in Mexico, and then moved to Bourke to help his brother set up an irrigation farm.

About three years later, my sister started encouraging me to come and visit. At first, I didn't want to go because I had found work with the same organisation as her husband, doing literacy and numeracy programs with indigenous people in the rainforests of Mexico, which was a wonderful job.

But my sister said, ‘I'm homesick. I really need family. Just come for a while.’ So I told her I would come just for 6 months.

My first impression of Bourke was absolutely incredible. You know how the sky can just turn all colours in the outback? I stepped out of the plane just after a storm, straight into the splendour of a red sky. I had never even seen the whole horizon in my life, and immediately fell in love.

I also fell in love with the community of Bourke, which was so friendly and supportive. My sister and I just felt totally accepted. We never experienced anything negative, only curiosity, because they had never met a Mexican before! Of course, it probably helped that we spoke English well. And, as I played a little guitar, we were often invited to sing together at community events. My sister also started dancing lessons, which the little girls in Bourke loved!

Because of my work with indigenous people in Mexico, I was able to get a job at the local preschool, which had an emphasis on indigenous early education, literacy and numeracy. I also lived and worked on the farm, with my sister, my brother-in-law, his parents and his brother, Malcolm. We four younger people practically set up a dairy farm there together. I learned how to milk cows. In Mexico, I don't think I had ever seen a cow! To me, it was all just the most exciting experience.

Malcolm thought he was a proper bachelor at age 32. I had already liked what I heard about him before I met him. I thought, ‘Oh, he sounds great. And he's single, I'm single!’ Then, when we first met, I thought, ‘Oh my goodness! I do like him!’